The Fourth Day Of Christmas 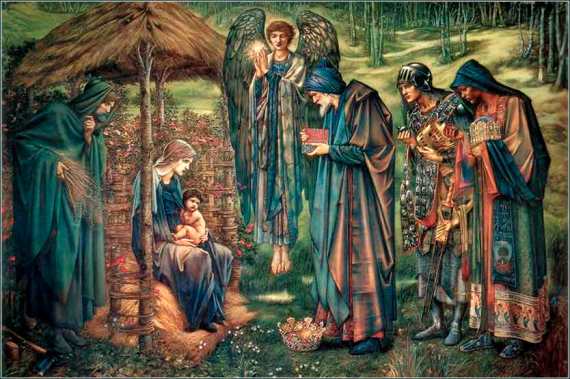 A Prayer For Today

Teach us to number our days aright, that we may gain wisdom of heart. Help us do today the things that matter, not to waste the time we have.

The moments we have are precious, Lord. See that we count them dear. Fill us this day with your kindness, that we may be glad and rejoice all the days of our lives.

We ask these things in the name of your son, Jesus Christ, who taught us to pray saying:

Our Father, who art in heaven, hallowed be thy name. Thy kingdom come; Thy will be done, on earth as it is in heaven. Give us this day our daily bread, and forgive us our trespasses, as we forgive those who trespass against us. And lead us not into temptation, but deliver us from evil.

For Thine is the kingdom, and the power, and the glory, forever and ever.

St. Matthew, one of the twelve Apostles, is the author of the first Gospel. This has been the constant tradition of the Church and is confirmed by the Gospel itself. He was the son of Alpheus and was called to be an Apostle  while sitting in the tax collector’s place at Capernaum. Before his conversion he was a publican, i.e., a tax collector by profession. He is to be identified with the “Levi” of Mark and Luke.

His apostolic activity was at first restricted to the communities of Palestine. Nothing definite is known about his later life. There is a tradition that points to Ethiopia as his field of labor; other traditions mention of Parthia and Persia. It is uncertain whether he died a natural death or received the crown of martyrdom.

St. Matthew’s Gospel was written to fill a sorely felt want for his fellow countrymen, both believers and unbelievers. For the former, it served as a token of his regard and as an encouragement in the trial to come, especially the danger of falling back to Judaism; for the latter, it was designed to convince them that the Messiah had come in the person of Jesus, our Lord, in Whom all the promises of the messianic  Kingdom embracing all people had been fulfilled in a spiritual rather than in a carnal way: “My Kingdom is not of this world.” His Gospel, then, answered the question put by the disciples of  St. John the Baptist, “Are You He Who is to come, or shall we look for another?”

Writing for his countrymen of Palestine, St. Matthew composed his Gospel in his native Aramaic, the “Hebrew tongue” mentioned in the Gospel and the Acts of the Apostles. Soon afterward, about the time of the persecution of Herod Agrippa I in 42 AD, he took his departure for other lands. Another tradition places the composition of his Gospel either between the time of this departure and the Council of Jerusalem, i.e., between 42 AD and 50 AD or even later. Definitely, however, the Gospel, depicting the Holy City with its altar and temple as still existing, and without any reference to the fulfillment of our Lord’s prophecy, shows that it was written before the destruction of the city by the Romans in 70 AD, and this internal evidence confirms the early traditions.

Therefore, since we have been justified through faith, we have peace with God through our Lord Jesus Christ, through whom we have gained access by faith into this grace in which we now stand. And we boast in the hope of the glory of God. Not only so, but we also glory in our sufferings, because we know that suffering produces perseverance; perseverance, character; and character, hope. And hope does not put us to shame, because God’s love has been poured out into our hearts through the Holy Spirit, who has been given to us.

Since we have now been justified by his blood, how much more shall we be saved from God’s wrath through him! For if, while we were God’s enemies, we were reconciled to him through the death of his Son, how much more, having been reconciled, shall we be saved through his life! Not only is this so, but we also boast in God through our Lord Jesus Christ, through whom we have now received reconciliation.

The Magi Visit the Messiah

After Jesus was born in Bethlehem in Judea, during the time of King Herod, Magi from the east came to Jerusalem and asked, “Where is the one who has been born king of the Jews? We saw his star when it rose and have come to worship him.”

When King Herod heard this he was disturbed, and all Jerusalem with him. When he had called together all the people’s chief priests and teachers of the law, he asked them where the Messiah was to be born. “In Bethlehem in Judea,” they replied, “for this is what the prophet has written:

“‘But you, Bethlehem, in the land of Judah,
are by no means least among the rulers of Judah;
for out of you will come a ruler
who will shepherd my people Israel.’”

Then Herod called the Magi secretly and found out from them the exact time the star had appeared. He sent them to Bethlehem and said, “Go and search carefully for the child. As soon as you find him, report to me, so that I too may go and worship him.”

After they had heard the king, they went on their way, and the star they had seen when it rose went ahead of them until it stopped over the place where the child was. When they saw the star, they were overjoyed. On coming to the house, they saw the child with his mother Mary, and they bowed down and worshiped him. Then they opened their treasures and presented him with gifts of gold, frankincense and myrrh. And having been warned in a dream not to go back to Herod, they returned to their country by another route.

“We Three Kings Of Orient Are”

“We Three Kings of Orient Are” sung by Jennifer Avalon.
Both the lyrics and the music were written by John Henry Hopkins, Jr. circa 1857

We three kings of Orient are
Bearing gifts we traverse afar
Field and fountain, moor and mountain
Following yonder star

Born a King on Bethlehem’s plain
Gold I bring to crown Him again
King forever, ceasing never
Over us all to reign

Frankincense to offer have I
Incense owns a Deity nigh
Prayer and praising, all men raising
Worship Him, God most high

Myrrh is mine, its bitter perfume
Breathes of life of gathering gloom
Sorrowing, sighing, bleeding, dying
Sealed in the stone-cold tomb

Thanks Be To God!